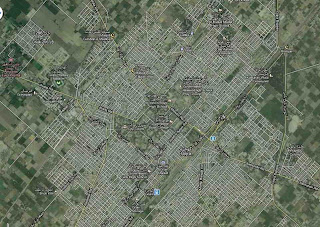 Gojra (Punjabi, Urdu: گوجرہ), the capital of Gojra Tehsil, is a city of Toba Tek Singh Districtin the Punjab province of Pakistan, it is located at 31°9'N 72°41'E and is located 30 miles (50 km) from Faisalabad, 125 km from Burewala, 157 km from Vehari and 20 miles (32 km) north of Toba Tek Singh. It has a history of more than hundred years, and being the centre of the cultivated lands, the village was known for its "Mandi" (market) for cash crops. Before the 1947 Partition of India that created Pakistan the "Mandi" was mainly handled by Hindus and Sikhs.

Gojra town was established in 1896 when colonisation of Lyallpur (Faisalabad) began. The railway line between Lyallpur and Gojra was laid in 1899. The town was given the status ofnotified area committee in 1904 and upgraded as B-Class Municipality in 1925. In 1906 the population was 2,589, according to The Imperial Gazetteer of India "The business done in this rising mart on the railway, which has sprung into existence in the last six years owing to the extension of the Chenab Canal to the surrounding country, bids fair to rival in importance that of Lyallpur itself".
In 1919 following the Rowlatt Act, hartals broke out throughout Punjab, Gojra was affected by serious protests and a member of the Church Mission Society had to be escorted out of the town by loyal residents.
After independence from Britain, in view of its increasing size, it was declared as 2nd class Municipal Committee in 1960. The town was raised to the status of Tehsil town and affiliated with the newly established district Toba Tek Singh on 01.07.1982. After the introduction of Devolution of Powers Plan, the Tehsil Municipal Administration Gojra came into being on 12.08.2001. Canal rest house is the oldest building constructed during British government in 1898

Gojra was a renowned centre for eye surgery. Its fame for ophthalmic excellence was known throughout colonial India. One of the leading figures of Gojra was the eye surgeon, Dr. Harbhajan Singh. He gave eyesight to a huge number of patients whose eyes could not be cured by many of the ophthalmologists in more sophisticated hospitals in big cities like Delhi, Lahore or Calcutta.Another leading figure was Dr Rehmat Ullah. He later on established an eye hospital in Gojra, by the name of Dr Rehmat Ullah's General and Eye Hospital. Later on his mission was carried on by his two sons Dr Abdul Hafeez and Dr Muhammad Iqbal.Now a days Dr Amanat is a famous eye specialist of gojra.He has also established an eye hospital by the name of Amanat eye and general hospital.He has also introduced laser treatment of eye in gojra. Currently a project to construct a 1400 bed eye hospital in Gojra is underway.

Gojra contributed a number of players to the Pakistan Hockey team, including Iqbal Bali and Muhammad Aslam . When they returned to Gojra they established their own hockey teams, and provided free training to the youth of the village. The biggest event in the calendar it used to be the annual fixture between these two teams. This match use to attract a huge crowd. This actually created a nursery for the Pakistan hockey team and many of the Pakistan hockey team players including Tahir Zaman, Muhammad Qasim.
The Gojra Hockey Club (a local club, has won this years Jat Tar Singh memorial U19 (Under 19) hockey tournament, this high profile tournament was held in India, where Gojra city team competed again best of Indian U19 hockey teams and won this championship. The Gojra team won this title by defeating Amritsar Academy 4–2 at Ludhiana hockey stadium.
The Manzoor-ul-Hassan and Rasheed-ul-Hasan brothers were the main source of inspiration for hockey and establishing it in their native town. They brought Gojra to be recognised in the hockey playing nations of the world. Manzoor-ul-Hassan (1972–1982) played 154 games and scored 101 goals for Pakistan. He was given the name "Wall of China" because he was so hard to beat as he was a defender (full back). Rashid-ul-Hassan played 199 matches and scored 9 goals. He was the backbone of the Pakistan Hockey team from 1979 to 1987.
Posted by Unknown at 11:26